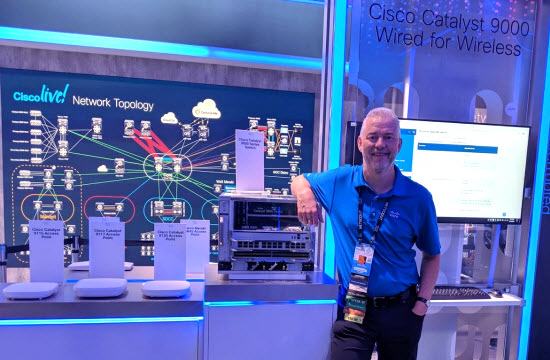 Peter at Cisco Live US 2019, standing behind the Cat 9k — technology near and dear to his heart.

Ask any engineer, “If you were to design an existing car from scratch, what would it be?”

Probably not a typical answer.

Well, Peter Jones is anything but typical.

“Let’s face it, the Camry is not the fastest, most luxurious, or most technologically sophisticated car in the world,” says the Distinguished Engineer. “But everyone drives them.”

The numbers don’t lie. Remarkably, Toyota’s midsized workhorse has been the top-selling car in the United States in 17 of the past 18 years.

“Designing the latest-greatest-fastest is exciting for many in my field,” Peter divulges. “But for me, what has always been most important is building products that can be widely adopted. It’s all about consumability.”

Bringing the Cat 9K to Life

This philosophy has served Peter well throughout his 15-year Cisco career. Nowhere more so than in the architecture of one of our flagship products, the Catalyst 9000 Series switch.

The year was 2006. A recent hire into DSBU, Peter’s group was tasked with building the “Next-Generation Wiring Closet.”

“We had to replace the best-selling switch line in the world, the Catalyst 3750,” he recalls. “We thought about faster. We thought about cheaper. Ultimately, our main focus was on flexibility. We wanted a system that could grow with our customers.”

The rest, as they say, is networking history.

Launched in 2017, the Catalyst 9000 quickly became the fastest Cisco line ever to reach a $1 billion run rate revenue. By the end of 2019, the family became the world’s best-selling switches.

Staying true to his roots, Peter has been more impressed with the ubiquitous nature of the family than its bottom-line boost.

“Don’t get me wrong, the revenue part of it has been awesome for the company,” he notes.

“But it’s bigger to me that just about everyone is using it. Just knowing that half of the world’s offices are running on stuff I helped create is humbling and rewarding.”

The reason Peter may not share many of the traditional views of other Distinguished Engineers is the fact that he is not a traditional engineer by trade. In fact, he’s quick to note that he’s a generalist, or a jack of all trades.

“I don’t have an engineering degree,” says Peter, who graduated from the University of Western Australia with a major in computer science and a minor in physics. “However, in college, I stumbled onto software and found my home.”

The software course covered a lot of (mostly defunct) languages (Fortran, Cobol, Prolog). The key, Peter says, was to get the basics down and learning how to learn.

“It was far more valuable than memorizing a bunch of details that I’d never use again,” he point out.

After college, Peter worked in the communications field, including software maintenance, software development, and a one-year stint in the U.S. doing field support. The Perth, Australia, native moved to Silicon Valley in 2001, working for high-tech startups.

After five years, however, he joined Cisco because, “I got sick of building things that didn’t go anywhere,” he says. “When you work for small companies, you can build really cool things — but they often just disappear.”

In 2010, he was promoted to Principal Engineer. By 2014, his focus had shifted from internal — working mainly on the Catalyst 3K — to external, working directly with the field and our customers.

In 2018, he was named Distinguished Engineer. Today, Peter has influence across the enterprise hardware portfolio, including switching, routing, wireless, and industrial.

Peter has been fortunate to find places to speak to his passions. He speaks at multiple Cisco Live events per year, twice earning the coveted title of “Distinguished Speaker” and, earlier this year, was named Chairman of the Ethernet Alliance.

In addition, he has spoken at several other forums, including Tech Field Day, CHI-NOG, BICSI and IWCS, and recorded podcasts and videocasts for the Network Collective, Rule11, and Cabling Installation & Maintenance, among others.

“Somewhere along the way, I figured out I could speak across teams — acting as a bridge across disparate groups, from software and hardware to marketing and others — and help them all understand each other,” Peter explains.

The start of the journey outside Cisco goes back several years, with an internal presentation on Ethernet standards for Cisco field engineers.

Impressed, one of the viewers — Dave Zacks, who later became Director of Innovation for CX — said the presentation would be great for Cisco Live.

Peter remembers thinking, yeah right. “I wasn’t sure I could do that. But Dave was persistent and said we could do it together. I was in.”

They titled the presentation, “Ethernet Evolving—Ethernet at New Speeds, Deterministic Networking, and Power over Everything!” and presented it at Cisco Live 2015 in San Diego. It turned out to be one of the top-scoring new sessions and was a crucial step in their journey. The duo continues to speak as a team.

Now a seasoned public speaker, Peter admits he’s still “terrified every time” he gets up in front of a group.

“The audience has chosen to attend, so the goal is always to deliver a great session,” he says. “It’s very rewarding — and that far outweighs the nerves. I work very hard on simplifying my stories and material.”

The key to successful presentations? Simple. “Talk about what you truly believe in — the things that really excite you.”

“I feel very fortunate that Cisco has allowed me to do this,” Peter explains. “It’s given me the opportunity to influence the industry in ways that I never expected.” 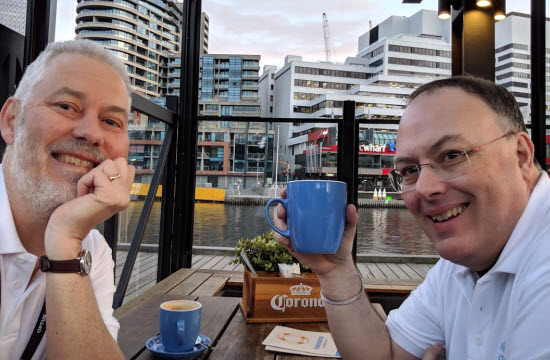 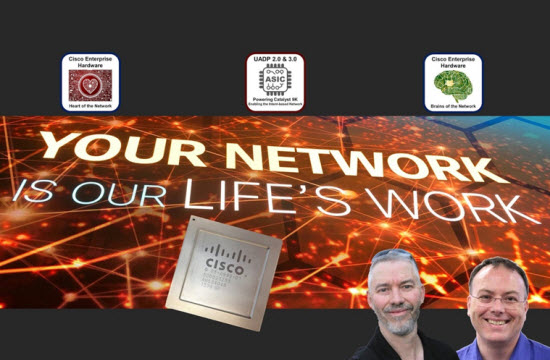 Peter and Dave’s closing slide of their Cisco Live US 2019 presentation. 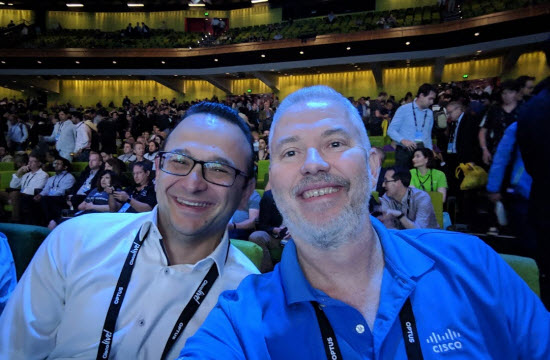 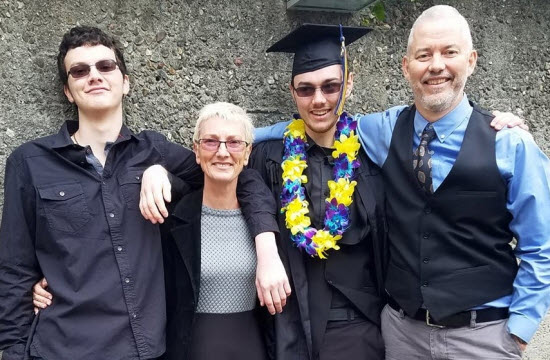 Peter and his family at his son Patrick’s graduation from UC Berkeley in 2017. (From left to right: son Dylan, wife Jenny, son Patrick, and Peter.) 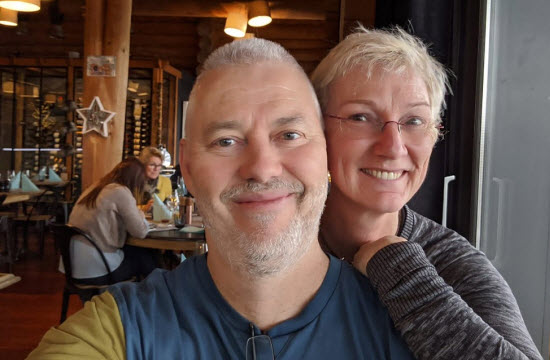 Peter and his wife Jenny at a restaurant just across the French border from Geneva, January 2020.