Some call it fate. Others call it destiny. Some might call it the ultimate Cisco Connection.

Regardless of the terminology, consider the story of Cisco’s own Marko Vukadinovic, Dejan Puhar, Srdjan Ciric, and Mihailo Cosovic. You might even call them the Vidikovac Four. 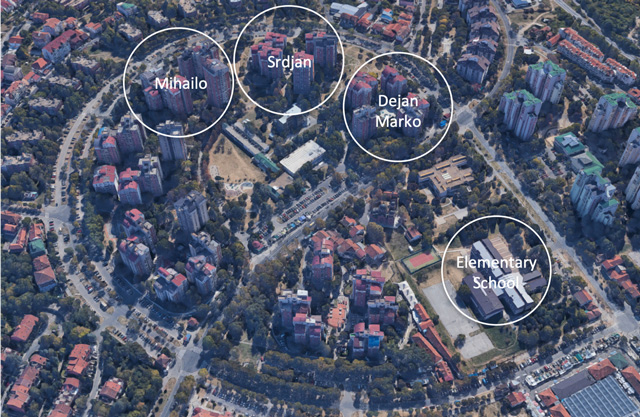 This circular neighborhood comprised of six housing towers. Dejan and Marko lived in building 1, Srdjan in building 2, and Mihailo in building 3.

It’s no hyperbole to call these guys true lifelong friends. The foursome literally grew up together less than 300 meters apart in Belgrade, Serbia. Their urban neighborhood in the Rakovica area of Belgrade was called Vidikovac, Serbian for “viewpoint.”

Long before they could walk or talk, the four began attending Vidikovac’s daycare, called Labudic, or “Little Swan.”

“Playing soccer [football] against different groups of kids from a different circle was the thing for us,” Srdjan recalls. “We used to make small houses where we could play on the ‘planet’ — just across our circles.”

“We also spent a lot of time outside playing marbles together,” Mihailo says. “God only knows how many of them I lost on the playground next to Srdjan’s building.”

Srdjan and Mihailo were both in the same class at Branko Copic elementary school.

In September 1984, the group moved up together to attend the neighborhood’s elementary school. Just for a little perspective, Cisco Systems was officially founded three months later, in December 1984.

After eight years, Marko, Srdjan, and Mihailo went to high school together, while Dejan moved away to attend a different secondary school. The four met up again in 1996 while attending the University of Belgrade School of Electrical Engineering.

“I think we must have been fed some special food in school so that we would all become engineers,” Srdjan explains.

After college, the friends went their separate ways. Initially, at least. 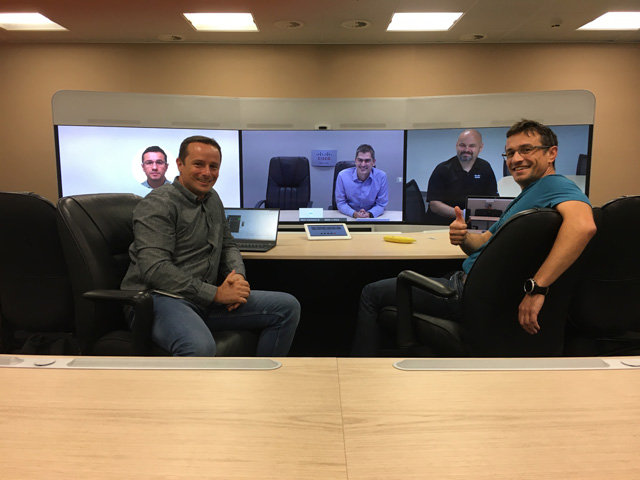 Srdjan, Mihailo, Marko, and Dejan all together during a recent TelePresence meeting.

Marko and Srdjan at Cisco IMPACT 2019, in Las Vegas.

That is until fate — that word again — reunited them at Cisco.

Around 10 years ago, Mihailo was working for Serbia Broadband (SBB), a cable TV and internet service provider in Belgrade — which happened to be a large Cisco customer. Dejan was at ComuTel in Belgrade, a Cisco partner deploying the network solution at SBB. Marko was working for Alcatel and later joined Cisco in Belgrade in 2007.

Around the same time, Srdjan was working for PSTech but was looking to move to Brussels. He discovered Mihailo was also in Brussels, and as he was about to take a job offer there, when when he landed a position in our Technical Assistance Center (TAC) in San Jose.

By 2010, all four were working for Cisco — carving their own career paths. 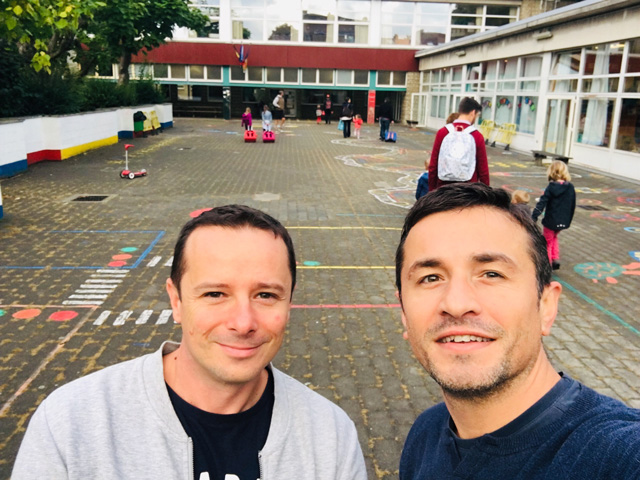 Dejan and Mihailo at the school both of their daughters attend in Belgium.

Today, Mihailo and Dejan live in Brussels, Belgium. Mihailo is a customer success specialist in the CX organization. Dejan is a service manager for Global TAC Sourced Support. Srdjan is a systems architect in Sales, based in Austin, Texas. Marko is a systems engineer manager in their hometown of Belgrade.

While separated geographically, the four regularly connect via Telepresence as well as events, such as conferences and Cisco Impact.

“It’s an amazing and rare experience that all four of us are working at Cisco — able to share our experiences with each other,” Srjan shares.

The future is bright for this brotherhood. Like their fathers, Mihailo and Dejan’s daughters attended the same daycare and are currently elementary schoolmates.

“We never know what the future holds,” Mihailo says. “Who knows, maybe our kids will repeat this cycle and one day work at Cisco.”