Get to Know
Jonathan Rosenberg 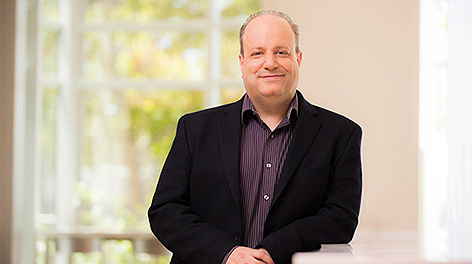 At age 6, Jonathan Rosenberg knew exactly what he wanted to do when he grew up: "I want to work on computers," he'd say.

His job is to drive our cloud strategy. In the past two years he has been a key force behind our Cisco Spark collaboration product and its underlying hybrid cloud architecture. Both are cornerstones of our strategy to leapfrog the industry in the transition to cloud.

"I need to work at a place that is committed to embracing cloud and changing the world through this transition," Jonathan said. "Cisco is firmly committed to that."

Jonathan taught himself BASIC at the age of 12. By high school, he landed a job building computers.

Next stop was MIT, where he received his bachelor's and master's degrees. After that, he was selected for an internship program at AT&T Bell Labs, where he completed his PhD from Columbia University.

During his internship, Jonathan was the lead author and co-inventor of Session Initiation Protocol (SIP), which became the cornerstone technology of modern telecoms. His vision and architecture for IP telecoms are now at the heart of how the industry operates.

"I love disruption, innovation and change," he said. "Today, the industry is being disrupted by the cloud. I became convinced that the cloud would become the ‘next big thing' and wanted to work at a place that is fully committed to embracing it. I know Cisco is committed to that."

In 2002, Technology Review magazine placed him on the "Innovators Under 35" list, which included some of the world's top technologists.

He also was named a "Top Supergeek" by CRN and won a Pulver Von Pioneer award for contributions to the VoIP industry.

Earlier this year, he was presented the Ohio University Strowger Award for transformational innovation in the telecommunications industry.

At home, Jonathan is your classic "tech geek" and "hardcore video-gamer." He loves to read science fiction and fantasy novels and is a long-time World of Warcraft player.

What do you keep in your office for inspiration?
"A variety of sci-fi and fantasy action figures. I rotate them from the shelf to my desk so that people I video call get to see a new toy each week.'"

What's your favorite book?
"A Fire Upon the Deep by Vernor Vinge. It's a Hugo Award-winning hard science fiction novel. I love the concepts it introduces and the world-building it creates around them."

What's your favorite food?
"Cheese. I'm a foodie and love fine cuisine and wines. In fact, I am a member of the Cheese of the Month Club at my local artisanal cheese shop."