Larry, third from left, and some of his team in Cleveland for the Republican National Convention.

More than 50,000 people will converge in Cleveland on July 18 and another 50,000 in Philadelphia on July 25 for the Republican and Democratic national conventions. All of the delegates, members of the media and other attendees are counting on Cisco, as the official Network Technology Provider for each convention, to securely and reliably connect the four Republican venues and eight Democratic sites.

In addition, tens of millions more will be watching on television and online.

For most people, this would be a huge, pressure-cooker project. But for Larry Hutchins, it's just another day at the office.

Larry, a network consulting engineer, has been managing similar projects for the past quarter century for Cisco and other companies. He loves the challenge of a high-profile, high-intensity project—and he's seen plenty of them.

This is the fourth consecutive time Cisco is supplying the hardware, software and services to enable complete data, voice and video and security for the two U.S. conventions. Once again, WAN, VPN, VoIP, TelePresence, security, Wi-Fi access and real-time network monitoring will enable interaction among the convention attendees and the rest of the world.

As lead architect, Larry's role was to create the overall architectural design and convey his vision to the team.

"My style is to take in all the requirements and other information from the customer, come up with a plan, disseminate it to the team and then let them run with it," Larry said.

He added that a big plus is Cisco's talented teams supporting both conventions. "The teams are comprised of Technology Leads who provide valuable input into architecture and have led the installation of convention venues, which are all but complete as convention dates are a short time away."

In addition to the miles of cable, the project includes dealing with local unions, city politics and strict deadlines, oftentimes resulting in unrelenting pressure.

With his deep networking skills, Larry was drawn to the technical challenge of the project—a "global showcase for Cisco innovation and cutting-edge technologies."

Then there were the personal opportunities.

"I believe taking on such roles allows you to stretch yourself outside of your comfort zone. They also provide the opportunity to build relationships across various groups and interact with talented people you normally would not ever meet within Cisco."

The 16-year Cisco veteran previously spent nearly two decades at AT&T in strong technical roles before coming to Cisco. He's seen a lot during that time, yet he points out the national conventions bring unique challenges.

Requirements are constantly changing and once the presidential candidates are narrowed down, their input for the convention setup must be incorporated. The network architecture must be flexible enough to accommodate these changes–even during convention week. 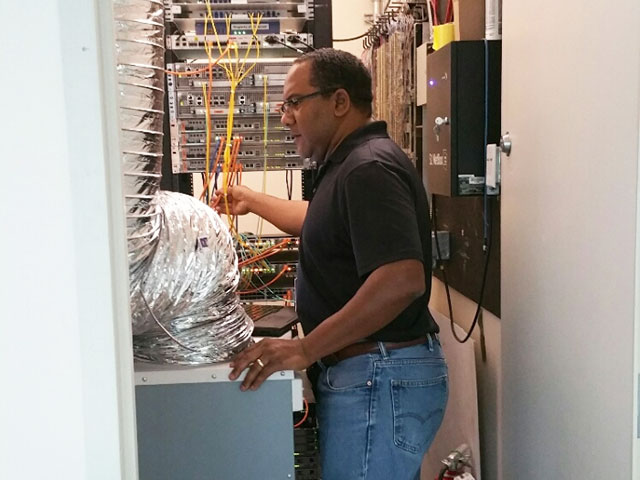 Larry putting the finishing touches on the network he designed inside the Democratic National Convention.

"Larry has shown the entire organization that he's a strong team leader—not just a strong technical leader," Mike explains. "Larry understood the mission and its objectives and made sure we, as a team, were aligned to deliver a plan based on his vision."

Larry, a self-described hands-on person, prefers to lead by example.

"Leadership is about listening, providing direction and then getting out of the way," Larry says. "Micromanaging hampers personal and professional growth and prevents the team's ability to get things done."

The Mississippi native grew up and lives in the Dallas area. Away from work, he most enjoys spending time with his three daughters and playing golf. Having flown over 51,000 miles in 2016 supporting both conventions, Larry is looking forward to family time and a little golf soon.

Two of his daughters (Ashley and Laureen) have already graduated from Texas universities, and another (Kennedy) is starting at Texas Christian University this Fall. All three daughters have been involved in gymnastics and competitive cheerleading since they were young (Kennedy will be joining TCU's cheerleading squad).

"Whenever the girls' gymnastics or cheerleading teams would travel to different competitions, the dads would also take their golf clubs and play on the off days," Larry says. This has enabled him to play some of the best golf courses in the country, with California, Florida and Hawaii being his favorites.

He also volunteers with Habitat for Humanity, North Texas Food Bank and the Red Cross.