A Simple Idea and Use of Technology Gives Hope to Refugees 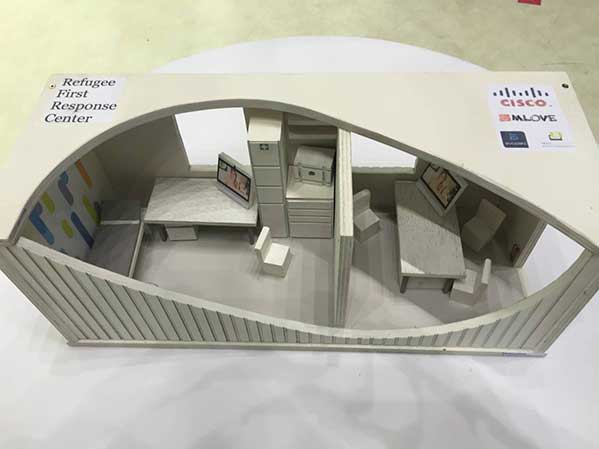 The Refugee First Response Center is a medical emergency station operating within a shipping container. Doctors and paramedics have access to 750 interpreters who collectively speak about 50 different languages.

They flee places like war-torn Syria, Iraq and Afghanistan, including families with babies, even lonely kids and teenagers sent alone, risking perilous journeys on land and sea. Many do not survive. During their escapes, many refugees who survive are injured, perhaps during long treks through deserts or mountain ranges. Then there are the unseen wounds of psychological trauma.

As refugees flooded into Europe this summer, many felt that they wanted to help. One of those people was Mirko Bass, a Business Development Manager at Cisco based in Hamburg, Germany. "I work in a multinational high-tech company that’s connecting the world, and I feel that I have both a personal and a professional duty to help." This is a human story of how a simple idea to use technology is making a huge impact to thousands of refugees.

At a refugee registration center in Hamburg, Cisco and other organizations recently launched an innovative humanitarian effort. During this time, while sorting clothes for migrants, Mirko with other company employees brainstormed an idea for a central service center point to deliver initial medical care. Through the global Cisco initiative "Be the Bridge—All-In-for-Good", they raised the five-digit sum that was needed in record time. They then worked through existing partnerships with other Hamburg institutions to bring the concept to reality in just six weeks.

The Refugee First Response Center (RFRC) is a 20-foot international shipping container transformed into an emergency medical facility. It comes equipped with advanced communication technology, such as free Wi-Fi for doctors and refugees and systems allowing remote language interpretation during consultations through high-definition video.

It’s having a powerful effect on the refugees who step inside. Mirko recalls a Syrian woman with her small baby who was suffering a medical condition that went untreated throughout their journey to Germany. When she finally was able to talk with someone who spoke Arabic and understood what she was going through, Bass saw the relief and hope return to her face. 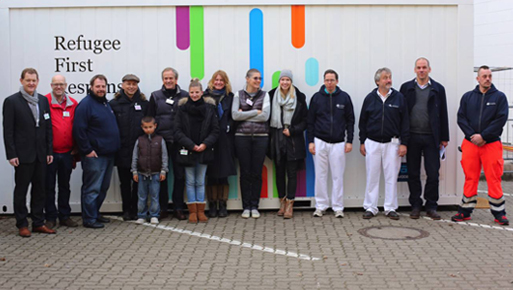 Mirko says the collaborative effort by multiple organizations brought this to life in only six weeks.

In the response center, examining doctors and paramedics have access to 750 interpreters, trained in medicine, who collectively speak about 50 different languages. Interpreters can join a video streamed patient consultation within two minutes to assist with decisions of medical treatment or trauma therapy as appropriate.

Among the most common languages typically spoken by refugees are Farsi (for Afghans, Iranians and Iraqis), Arabic (for Syrians), Urdu (for Kurds), Albanian, Tigrinya (for Eritreans and Ethiopians) and Serbian.

Providing the medical expertise is the University Medical Center in Eppendorf while the remote interpreting services is the work of SAVD Videodolmetschen. Also contributing were avodaq AG, Cisco’s partner for large-scale, high-tech integration projects; and the MLOVE innovation network, which led the outfitting of the container. This ecosystem of collaborators has also been engaged in bringing video conferencing into the classroom to help critically ill children to participate in school.

“The refugee situation, given its sheer scale, requires all of us to help in some way.”
- Mirko Bass, Business Development Manager at Cisco

Cisco provided a pair of Cisco DX80 terminals easily operated by touchscreen, two Meraki Wi-Fi access points for Internet access both inside the container and out, and about 150 yards of network wiring cable connecting the technical equipment to a small server rack.

Beyond the technology, Mirko now feels a personal commitment to the refugees and helps in many other ways. He frequently visits the site and even holds a Red Cross badge, which allows him entry to the facilities at any time to lend a hand. Mirko says that it’s when he sees the many families with children at the site that he especially realizes that he’s doing the right thing.

The success of the RFRC has spurred thoughts of creating more units for use at other refugee centers. The equipment could also be used to treat international patients or to handle such matters as asylum processing. Even more people could find hope in a shipping container.

In Mirko’s words, "Everyone involved in the project hopes that it will not just serve as an example but will also ignite ideas elsewhere for ways in which technology can help people. If we manage to offer a little inspiration to others, then we’ll have accomplished a great deal."