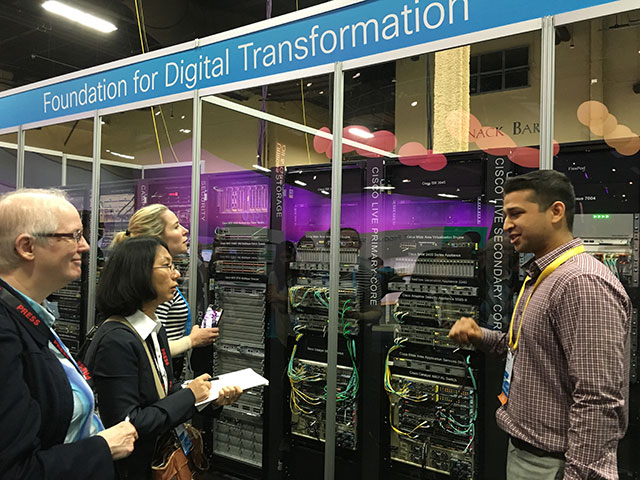 The NOC team is responsible for designing the network architecture, and staging and deploying it at about 60 trade shows and events each year. Ryan Dsouza (right) speaks to the press.

If you attended Cisco Live in Las Vegas this summer, you might have taken it for granted that the network at the event worked like a charm. It’s OK to admit it. After all, it was a Cisco event, and networking is what we do best.

Perhaps you had to break out your laptop to do some work. Or catch a demo on the showroom floor. Or download some hefty files. To say nothing of the events on stage—including Chuck’s connected keynote, which was seen by 28,000 attendees live and via TelePresence across three locations simultaneously.

But, like any master artist who makes the impossible look easy, there’s a team of unsung performers behind the scenes at proprietary mega-events like Cisco Live. That team is the Network Operations Center team—NOC for short. And they work tirelessly, year round, so that you don’t notice they’re there.

“For Cisco Live, this team sets up a network with capabilities equivalent to those of a small city in under a week—and it’s screaming fast,” says Jennifer Massaro, a senior communications manager at Cisco. “It’s like turning on the faucet for water—you don’t think about it unless it doesn’t work.”

It truly is a unique role within the industry. “Most companies don’t set up their own network at a show like this,” Jennifer says. “They rely on the network capabilities that the hotel can provide, which are seldom ideal.””

And it’s not just for Cisco Live. The NOC team is responsible for designing the network architecture, and staging and deploying it at about 60 trade shows and events each year—including GSX, Partner Summit, IoT World Forum, Collaboration Summit and more. 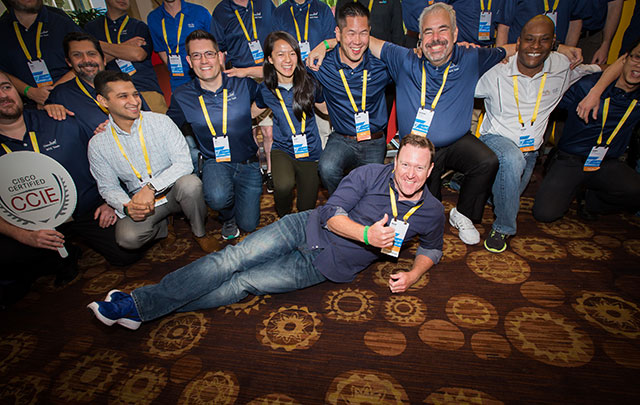 The core team is small, made up of six people. Among them are Program Manager Rene Gonzales and Chief Architect Ryan Dsouza—both technical marketing engineers; and Project Manager JW McIntire. The team has only been together for about a year, but its members have many years of experience in the event world.

The Network Is the Demo

So what does it take to set up an enterprise-class network of this scale in four days?

Preparation is key. After an event like Cisco Live, the team has less than two weeks of closeout activities, followed by a week of downtime. Then the team immediately holds its kick-off meeting for next year’s Cisco Live.

As the team travels to different geographical theaters, they join forces with Cisco’s brightest and best in those locations. The team constantly tries to improve the experience for event attendees, and is always pushing the envelope as far as using the latest stable Cisco technologies.

“We get to play with Cisco’s latest solutions—not just learning about them, but figuring out how they’re useful to our customers and showcasing them,” Sean says. “I don’t think there are many other roles in the company that expose you to so much of our portfolio.”

“The network is on display all the time. It has to not just work, but it also has to look nice and be a clean install,” JW says. “The network is the demo.”

In the run-up to a big event, the pressure is on, with some team members pulling 16- and 18-hour days. And even with all that planning, there are times when curve balls fly.

“The whole thing is really a giant puzzle every time,” JW says. “It’s constantly challenging you, and it’s a race against time.”

Connecting Everything in Four Days

And when it’s all over—to give you some idea of the scale of an operation like Cisco Live—attendees have downloaded some 50 terabytes of data across the network, in just four days. That’s like transferring the entire written contents of the U.S. Library of Congress, every day during the event. When we say as part of Our People Deal that we connect everything, we’re not kidding. 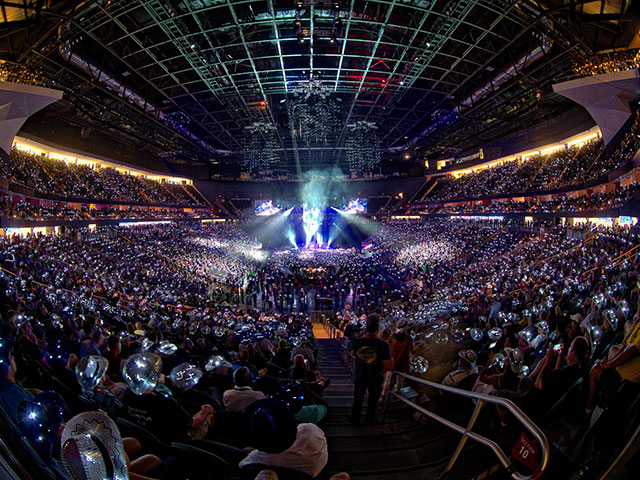 At the last Cisco Live US, Chuck’s connected keynote was seen by 28,000 attendees live and via TelePresence across three locations simultaneously. The team sets up a network with capabilities equivalent to those of a small city in under a week.

“Seeing the event come together at the end of a long and stressful week is something I look forward to,” Ryan says. “That and getting to work with colleagues on site that I haven’t met since the last Cisco Live.”

What qualities does it take to be on the NOC team?

For starters, strong networking technology skills—and a desire to learn. Networking specialists will have to continue to learn new skills to pull off these huge projects as Cisco evolves its network. At Cisco Live, we unveiled more details about its new digital network, with enhanced security capabilities, analytics, and automation features.

Then there are the personal features. The members say they share a degree of perfectionism, but the job also calls for flexibility and agility to roll with the inevitable punches. There’s also a degree of personal sacrifice.

“There’s a lot of travel,” Rene says. “I think I’ve missed every one of my son’s birthdays.”

“The NOC team are the rock stars of event networking,” Sean says. “It’s like a badge of honor to be involved with the Cisco NOC team and be a part of the success.”