Make a Difference and Start Folding

by Gergely Berta · Global Marketing and Corporate Communications · The Netherlands 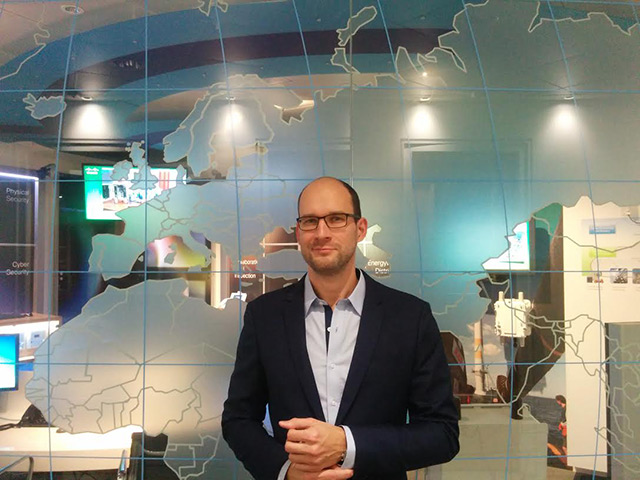 Gergely in our Customer Briefing Centre at our Amsterdam office.

Cisco helps cure cancer, Alzheimer’s, and Huntington’s – a statement which I would’ve been skeptical about a couple years ago.

But how? This is the story of how we are using Cisco's technology and IT data centers to make a difference for people across the globe.

It all began with a casual chat over coffee with my colleague, Walter Ho. In passing, he mentioned we had some extra-unused compute capacity in our IT data centers at Cisco. After a brief discussion, we dropped the topic and carried on with our day.

Later that night, I was relaxing at home when the idea hit me: Why don’t we use that extra capacity for charitable purposes? I had read about a project called Folding@Home by Stanford University that I believed would make a good fit. It would allow Cisco to use existing resources to help make the world a better place, which is something that we can all stand behind.

Folding@Home is a global movement to encourage sharing your computer power to form the world’s largest distributed computing project to help find a cure. A simple piece of software that you can install on your computer can help Stanford University solve calculations in the study of disease, and the software runs in the background while you work, while you sleep, while you spend valuable time with your family

It was the perfect crime: We could use our IT data center resources we don't momentarily need for our business, and dedicate them to running Folding@Home!

The next day I pitched the idea to colleagues at the office, who had expertise in infrastructure. What happened next is one of the reasons I enjoy Cisco so much. Known and unknown colleagues from across the world offered their help and input in finding a way to make this charitable idea happen. After much excitement, we formed a virtual project IT team across the United States, United Kingdom and the Netherlands. We also had an army of colleagues lending a helping hand along the journey.

The Cisco Folding@Home team came together from across the globe. Ian Pudney from the United Kingdom (left), Todd Glenn, Roy DSouza and Ken Hyer from RTP (center) and Gergely (far right).

With expertise from the team, we came up with the plan. We will use a complete Cisco solution stack for this purpose. Running on Cisco DC Networking, and UCS Server Blades, we set up virtual machines. What's more, these VM's are hosted on our own, in-house cloud/IaaS platform, CITEIS.

Our leadership team was fully supportive, so we began to run Folding@Home in some of our data centers.

Stanford scientists have published 129 peer-review scientific articles since Folding@Home launched, many of which have contributed to cancer drugs currently in development. I am proud that our technology can make a meaningful difference to change our world for the better and benefit everyone.

Together, we can do more. Join our global Cisco Team in the fight against these diseases. Our Cisco Team has put together a quick how-to guide to help you install the Folding@Home client and sign up to our Cisco Team. It only takes five minutes, so Start Folding!

While I feel incredibly fulfilled that I got to drive this idea to completion, it's really all the people involved who deserve the credit. Because ultimately, it was everyone's energy, knowledge, and drive that made this happen. Without these, all the technology in the world wouldn't make a difference. I feel lucky, because we have both those things at Cisco IT: technology that can, and people who do.