A Glimpse of Indian culture: through the Bollywood way 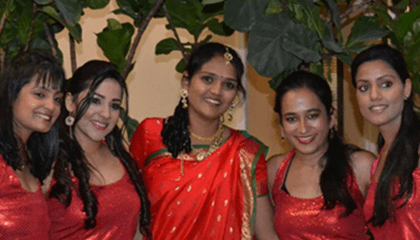 The rich cultural heritage and history from the land of India, showcasing its Unity in Diversity was brought to life for the very first time at Cisco’s Child Care Services through an interactive cultural event, "A Glimpse of Indian culture: through the Bollywood way".

The intent of this engaging event was to increase people’s knowledge and understanding of Indian culture and its dance forms. Attendees included the day care staff, Cisco parents and their tiny tots, as wel as friends and family. The dance forms that the team @ Cisco presented, were a combination the of rich texture of India’s many classical and folks dances such as Bhangra (folk dance of Punjab region), Lavni (folk dance of Maharashtra), Kathak (Indian classical dance); fused with the elements of Jazz, Hip-hop and Latin forms.

When asked, "Why Bollywood?" the initiator and organizer of this event, Vaidehi Bhandari, from the Services Business Architecture team said: "We believe Bollywood is a collage of many dance styles and is a very strong unifier for language, song-and-dance, and emotions that resonate well with internationally diverse audiences. It is also followed passionately in large parts of Africa, Eastern Europe and across SE Asia and is gaining popularity within the US."

To end the event, the day care kids participat in a workshop where they learnt some new dance moves, they had a blast with the gestures, expressions and the body language. The event was recognized by the audience as an effort to strengthen Cisco’s Inclusion and Diversity strategy. It truly showcased the culture and traditions of India with all those concerned in true international spirit with a new, exciting and fun filled platform. As Aristotle said, "limits exist only in the mind."