Beating Counterfeiters During the Pandemic

While much of the world has been impacted by the COVID-19 pandemic, Cisco’s Brand Protection team hasn’t slowed down one bit.

In fact, last month — during what may have been the peak of the worldwide shutdown — the China-based section of the squad led local police in a major anti-counterfeiting bust in Shanghai. 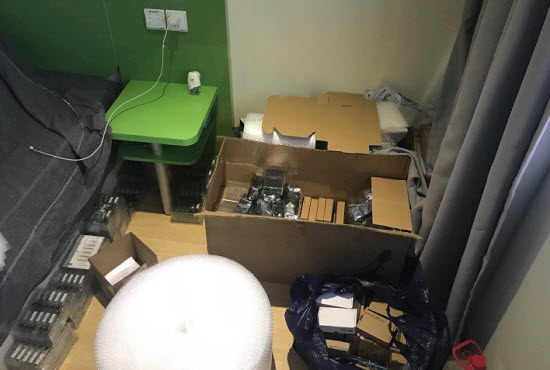 A transceiver is a pluggable interface used in a variety of networking environments — it’s about the size of a large box of toothpaste.

The takedown blocked counterfeiters from flooding the market with nearly 100,000 fake Cisco optical transceiver modules, together with forged product labels and brochures.

A transceiver is a pluggable interface used in a variety of networking environments — it’s about the size of a large box of toothpaste. The raid also netted three suspects in what is now an expanding criminal investigation.

Leading the investigation was Cisco’s Huan Yang, who is in charge of anti-counterfeiting in the Asia Pacific, Japan, and China (APJC) region, with a focus on China.

“The police considered this to be a big counterfeiting gang,” explains Huan, who joined Cisco last December. He quickly discovered that the company’s transceivers were being counterfeited.

From High Luxury to High Tech

Most recently, while based in Hong Kong, he managed investigations for the more than 25 luxury brands in the Louis Vuitton (LVMH) group in the APAC region.

He returned to his native Beijing when he took the role at Cisco to be on hand, working with internal investigators and external entities, including law firms, police, and customers.

“Some things are similar, some are different,” Huan says of the Cisco and LVMH roles. “Cisco provided me with the opportunity to lead an amazing Brand Protection team, leverage my skills and experiences, and focus on what I do best: protect our brand.” 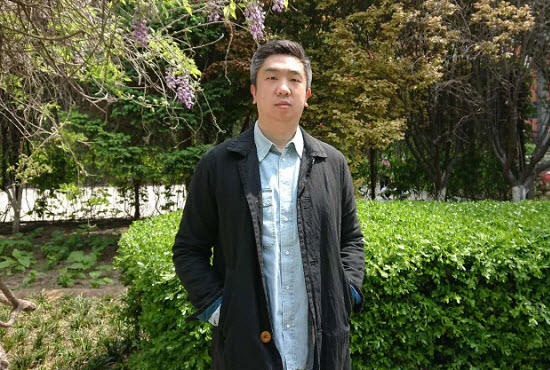 Cisco’s amazing culture, collaborative tools have made it easier for Huan to hit the ground running to protect our valued customers and partners during the COVID-19 pandemic.

Zeroing in on the Targets

Huan got a running start on the job. After learning of the fake transceivers through an ongoing investigation, he worked with investigators to find a high-profile target thought to be involved in the counterfeiting operation.

The team discovered an online store and connected the dots to a physical outlet and warehouse in Shanghai. All the locations were used to hold and assemble the products.

Next, investigators made a test purchase from the online store to verify the product was counterfeit. After a series of investigations on the ground in Shanghai, two more individuals became targets of their efforts. All three sourced the core components from the same supplier.

Further rounds of investigations and monitoring solidified the findings, paving the way for the April 17 raid, which continued through dawn the following day.

Beating Fraud During the Pandemic

Carrying out an investigation of this complexity and magnitude amid a pandemic brought extraordinary challenges. Many Chinese were still working from home and restrictions on air travel were still in force.

Still, Huan and the investigators had to travel to different jurisdictions to do the offline parts of their probe. They took part in coordinated raids at multiple locations in Shanghai, about 750 miles from Beijing, and in the neighboring Jiangsu Province.

“We had to travel to these locations physically because we had to provide evidence to police on who and where these guys were,” Huan explains.

At the same time, the police themselves were focused on COVID-19 and stretched thin.

“Chinese law enforcement officials’ willingness to help protect the IP of an American company reflects a recognition of the value of the Cisco brand and its impact on the Chinese economy,” notes Al Palladin, Legal Director and head of Global Brand Protection at Cisco. 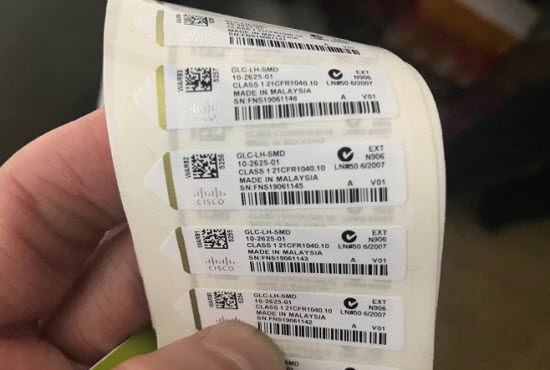 To the regular person, these counterfeit labels seem authentic — not to our experts.

This case also shows the increased sophistication of counterfeit operations.

The transceivers were not Cisco-made products diverted from the authorized sales channel for illegal profit. They were actually manufactured by fraudsters from the ground up, including an e-code that was written into the modules.

The more than 80,000 product brochures and 8,000 labels seized were of a caliber that would have made them passable to an unsuspecting end customer — the target of high-end counterfeiters. The evidence pointed to an operation aimed at selling close to 100,000 fake devices worth thousands of U.S. dollars.

Huan credits his team with helping him get up to speed to take on such a large haul so early in his Cisco career.

“I learned a lot from my colleagues in this amazing team,” he shares. “The raid is a good example of the resolve and perseverance in protecting our customers and products, especially in this difficult time.”

No matter what is going on in the world, Cisco will always track down fraudsters and protect our brand from those who seek to damage it.

If you suspect illegal or unauthorized activity that affects Cisco’s brand, send a tip — anonymously, if you prefer — to brandprotection@cisco.com.